the past month the fish in chew have seemed to venture further away from the Woodford Bank. The best areas have been around the Roman Shallows, Moreton Bank and off Wick Green from the boats. The bank anglers have seen most activity around Moreton and Nunnery Point, Walley Bank and The Oaks in Herons Green Bay. Washing line tactics are still producing plenty of fish and proving most productive with a team of Diawl Bach’s and a small booby or foam daddy on the point. FAB’s are another popular choice with Tequila and sunburst being the go to colour.

The past week has seen a few storms come and go at Chew causing the usual mayhem with boat angling. The positive from this is the remaining weed beds seem to have broken up nicely also spurring the fish into a fry feeding mood. Certainly worth trying out fry patterns and lures this time of year. Most anglers have fished midge tips although intermediates and Di3’s have worked too at times. Recent catch returns have shown white lures such as Cat’s Whiskers working and also Damsels are fishing well. Dry, bright and cold conditions seem to be the normal going forward now with winter well and truly on the way.

Simon Peters and friends from Cornwall had 2 days on the lake recently with Martin Cottis. Plenty of fish graced their nets from both the boat   and  bank. Simon’s Silver bar of around 6-7lb perhaps the pick of the bunch. This rainbow was from Walley Bank.

Not many days left for boat fishing now till the end of the season however bank fishing is a really good option at the moment and well worth the   trip. Bank fishing will continue till at least the end of November with an abundance of space.

Similar to last month, The Top End, Butcombe Bay and the Dam have been producing fish to the usual methods of floating lines near the weed and sinking lines or flies fished incredibly slow from floating and midge tip lines when fishing the deeper parts of the lake.

With the boat season now finished on Blagdon we would like to take this opportunity to thank every one of our customers for their continued support and look forward to welcoming boat anglers back in 2022.

Bank fishing, like chew, will continue to at least the end of November. It’s always worth coming prepared with a range of flies and lines for changing conditions during the autumn and winter months. Fish can move up and down in the water column at the flick of a switch. All your tackle needs can still be fulfilled still at Woodford lodge.

Bank fishing at Blagdon seems to be on the up with the North Bank and Pipe Bay producing the bests results. In terms of tactics we have varying reports covering all bases. These include Floating lines with Diawl Bachs and Foam Daddies and Intermediates with Minkies amongst other lures. This further shows the need to come fully prepared for change.

Much the same as last month The Pipe on Tank 3 has proved the best spot for anglers to head for. This is down to the Deeper and cooler water that is found here. Damsels, Buzzers and Diawl Bach’s still working for anglers, however in recent weeks reports have shown a switch to lure tactics. Colours seem to mainly be orange and black. Tank 1 is starting to produce some good action especially in the morning. When fishing The Tanks it’s been advantageous to carry an intermediate or sinking line as well as your floater.

With the cooler weather that is forecast for the rest of November we would expect the fish to spread out more on all the tanks as the need for cool water becomes less prominent in the trout’s mind. Now that the weed has died back, we expect to see the fish move into the margins where they will begin to prey on the abundance of sticklebacks in these waters. windward facing banks that are not too turbid being prime for these fry feeding fish. 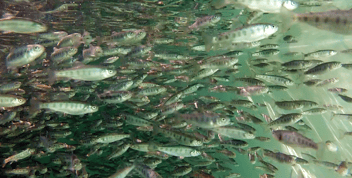 Shoplifting led to a successful conviction!

Crime doesn’t pay. In October 2019 our team noticed some suspicious activity in our tackle shop at...