The seasonal weed growth his year really has been phenomenal. Not only have the weed beds developed at a rate of knots but the bankside margins have also grown out of a control. This has led to a very limited amount of spots readily available for bank fishing at the lakes. Unfortunately, despite our best efforts and due to optimum conditions for weed growth we have had to make the difficult decision to suspend day ticket bank fishing permit sales until

27th August when the situation will be reviewed. Fundamentally we have made this decision in the best interests of our customers. We don't want anglers turning up at the lakes to find that there are no spots available to fish and we are also trying to free up what few spaces that area viable to our pre paid season permit holders 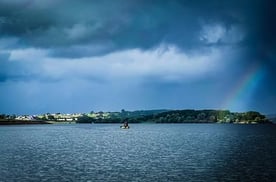 On a positive note, the hot weather has seemingly past (For Now) and we are confident that in coming weeks the lakes will become more accessible for bank fishing. The strong winds and rain are already breaking up the weed beds and in many instances rising water heights.  Seb Pecchia captured a great image perfectly illustrating the abrupt end to the mini heatwave.

The good news here is the weather has cooled off slightly with plenty of rain and thunderstorms, this is a perfect time to remind anglers of the protocol in the event of a thunderstorm. Stop fishing immediately and head to the nearest shoreline or the lodge and seek safety till it passes.

Those that have fished have found fish deeper down utilising Di3 lines down to a Di7 even. It seems the fish have moved out from the hotspots of late in search of cooler water so areas like The Dam and Boils are giving the best chance of catching by fishing a team of nymphs deep and slow. Just a reminder that anchoring is not permitted in the dam area and its worth being mindful of other anglers when fishing The Boils.

If any cloud cover appears it would be worth giving Dries and Washing Line tactics a go, even in warm conditions we see fish topping around the cages and out around the middle of the lake, Mr Downton and Mr Maxey enjoyed a productive day yesterday at the lake finding fish on damsel and buzzer patterns fished just under the surface on a slow intermediate.

For those who like their dry fly fishing few flying ants have started to show on warmer days so ant patterns and even a black Bobs Bit could see you putting a few fish on the bank. keep an eye out for gulls flapping erratically over the water when out fishing, a sure sign that an ant hatch is on. Damsel patterns are still proving deadly although with the cooler spell we aren't seeing so many around the margins of late. Weed beds seem to be dying back slowly.

A further 3,500 fresh fish were added to Chew in the last  couple weeks which has spurred on some good sport and awoken some of the resident fish too. At present these fresher fish have initially spread well with recorded captures all through the middle of the lake in recent days, one of the advantages of letting a fish pen go is that fish tend to spread better rather than hug the shoreline.

Water clarity is still great and no signs of any algae blooms being present on Blagdon. Another 1,400 fish were added last week and you can be sure it won’t take them long before they are tuned into the abundant naturals over at Blagdon.

Ranger Pete took a boat out recently and had a decent haul of rainbows fishing right up in Top End, fishing near the weed beds proving fruitful for him on this occasion.

Casting a line alongside the weed beds has been producing some good catches recently with anglers finding the fish stuffed full of Corixae as the fish take advantage of the plentiful supply of these water boatmen that we see annually on both lakes at this time of year. The fish find them hard to ignore and easily get preoccupied with just this food source so ignore this type of fly pattern at your peril! Keep an eye out for splashy rises as often fish will take corixae as they come to surface to capture air. Don't be fooled in thinking they are taking flies off of the surface that are hatching.

The Dam Wall and Butcombe Bank down towards the Spillway along with The Boils have still been producing fish to the usual methods to both floating lines near the weed and sinking lines when fishing the deeper parts of the lake. Early morning and late evening have been the best times as is the way this time of year. Especially on the brighter warmer days. Some anglers have experienced exceptional days in the area recently with reports of 30+ fish to some boats in a day. A reminder that if intending to catch and release to follow best practice found HERE

Much like Chew when some cloud cover is present Dry Flies can pick out some solid fish who are more willing to feed in these conditions. The next 10-day forecast suggests something a little more settled but with it, a small chance of a return of the heat.

We have had a few reports lately of ‘the one that got away’ so please don’t risk being under-gunned in the tippet department. A good quality 8/10lb breaking strain a must as the fish really do hit hard and give a great account of themselves! Plenty of options in the way of both nylon and fluorocarbon are available at both Blagdon and Woodford Lodge. Sunken Buzzers and Damsels around the Dam in the day and Dry Flies up at the Top End in the evening are the go to methods at Blagdon this week.

The early mornings and evenings have still been the best time to fish up at The Tanks. Fishing was tougher in the last few weeks with the warmer water temperatures around the edges. The Pipe on Tank 3 was possibly the best spot for anglers venturing out in the heat as it allows access to a bit of deeper and hopefully cooler water. 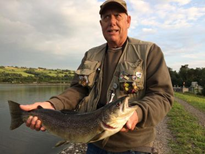 Damsels, Sunken Buzzers and Diawl Bachs still accounting for the majority of fish being caught at the moment. However, Martin Anstey managed a very impressive 4lb 10oz brownie from Tank 3 tempted on a Foam Beetle. The look on Martins face definitely lends itself to a caption contest (Keep an eye on Facebook for this) I think “Quick John take the picture, there’s more rising behind you” 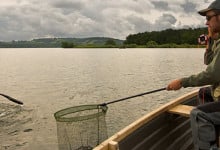 Another great start at Chew!

Our season ticket anglers are experiencing some great sport today here at Chew. Mr C Blacker had a... 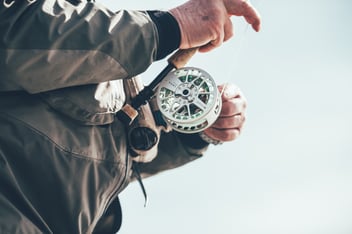 The start of the season is fast approaching, and we are looking forward to welcoming you all back! 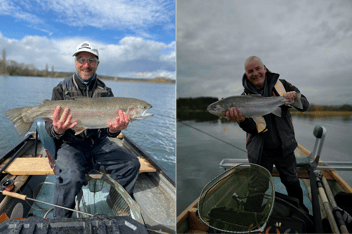